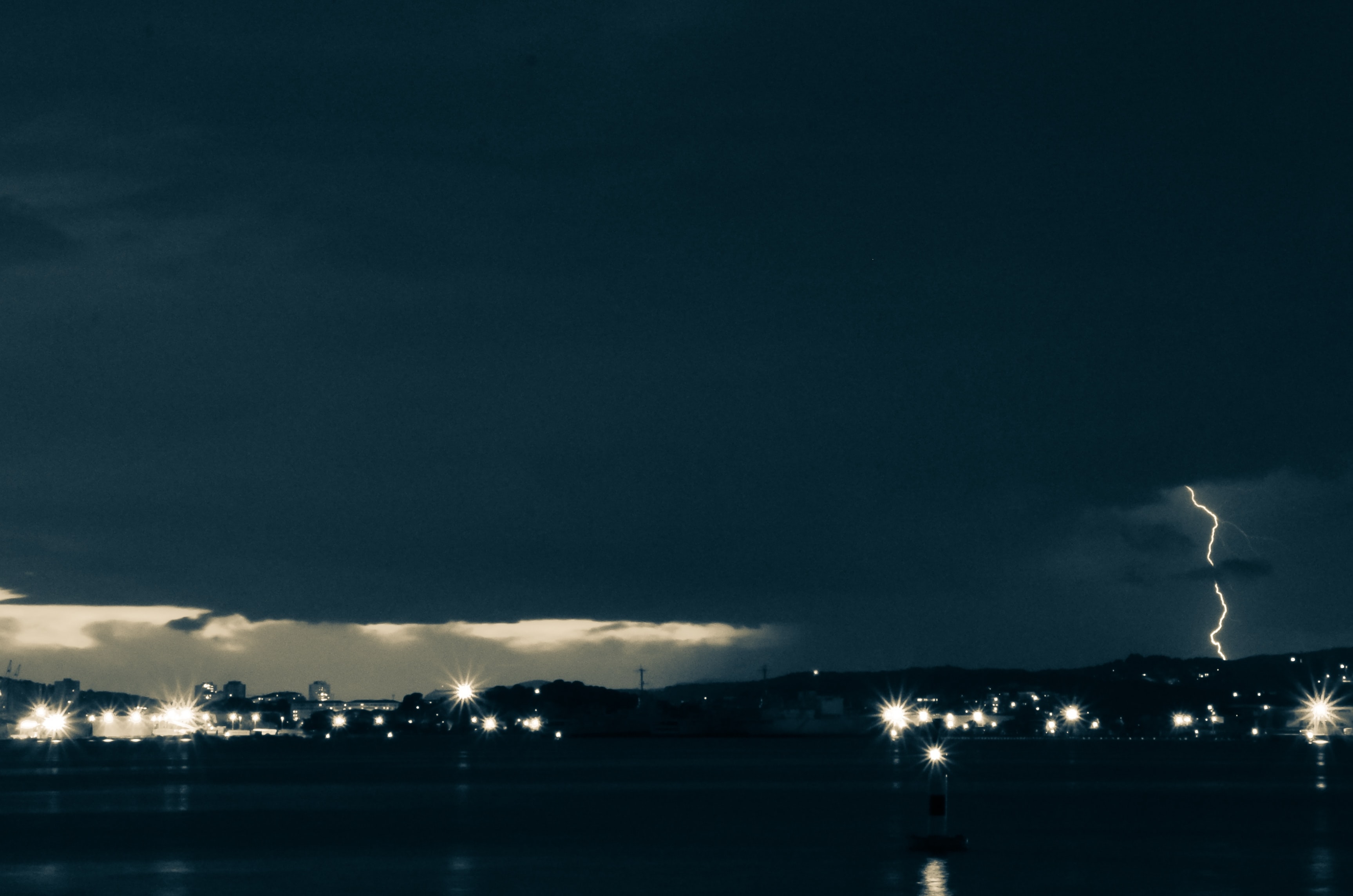 I woke up last night to the skies rumbling—like horsemen storming through the heavens, white light lancing through the thunderclouds. Curtains of water unleashed on our dry and thirsty streets. They fell in ceaseless waves, like mercy and mourning.

Do you ache for the broken beauty? The splendor of creation, diminished in our minds and narrowed to the small confines of our festivities, troubles and traffic jams.

We spin in the familiar orbit of our daily routines, insignificant creatures on a blue orb soaring through space. Stars wink out of the universe, their violent gaseous flames extinguished, and our lives continue untouched. Galaxies bend and spiral into a black unknown and we linger on, blissfully unaware. What is man, that You are mindful of him?

But when the thunder rolls, I am cut with heavenly hunger.

We spin, a world made for heaven but flying straight towards hell. We stand at once in rebellion and in shame, with one hand thrown into a fist against the skies and another chained to the collar of corruption. People cry out in a hailstorm of contradictions. Truth is a joke and life is cheap. But still we fight so hard—stirring words and bloody bodies—but for what?

We hate hypocrites yet find them in the mirror. I will preach the full and unmatchable value of life, of the equal worth in yours and mine. But when the waters rise, I’ll know, painfully and clearly, how empty pretty words are if I can’t trade my mortality for yours.

How much we need someone who sees us all the way to the core, in a wreck of frailty and failure, and loves us even in agony.

Do you ache for glory undimmed? Think hard and search deeply and tell me. Because I don’t believe you’re an existentialist. You don’t want to watch the world burn. You want to be on the right side of history with your trumpet of justice and kindness, these noble things that have no meaning in a world that exploded from nothing for no purpose. Simply to spin and spin and spin and die.

Like a diamond in the rough, lies only spring from pale imitations of truth. And it is there—the truth and the glory—gleaming beneath the dirt and grime. A crimson flower, blooming in the ashes of ravaged land. Creation groans, but not without the silver edge of hope on the horizon.

I listen to the rainfall and the roar. The mercy and the mourning. Our little corner of our small world trembles quietly.

But one day the skies will rend wide open for Heaven and Earth to collide. You will fling off the dark covers and creation will shrug off its old burdens. Shadows flee. Beauty unbroken. Glory undimmed.

Have we seen Light, until we see that day? We can drive that beat-up van through stretches of golden cornfield, dappled with dying sunlight, listening to the tired hum of the engine and wondering breathlessly when it will sputter and give out. Dusk descends and the crickets come alive with their calls—a song to the last embers of summer, a mournful goodbye to a lover.

A crack and sizzle snap the rhythm of the nighttime harmonies and the engine is gone. But this is where the real adventure begins. This is the part, in The Voyage of the Dawn Treader, where they sail past the Lone Islands, and there are no more maps, no more plans, only dreams. This is the part where the thrill of uncertainty sets into our bones the way deep crimsons and oranges have inked themselves into autumn leaves.

We’ll wade through the knee-high grass and weeds, run until we collapse, and sing old songs under the unfurled scroll of stars. And miles and miles later, we’ll find an airport and buy two one-way tickets to see the mountains of the world.

Thousands of feet off the ground, we’ll find another sort of sea, lost in the white tumble of clouds blending with snow. Sweating and bleeding from cuts, shivering from icy gales. Lightheaded with euphoria. Barely breathing from the thinness of the air. The taste of Death and Heaven both suddenly too close, but not the taste of fear—we threw it off the steep slopes on the way up, listened to its shrill shriek swallowed by the winds.

We can cut across red deserts and ancient pyramids and the city of kings. Press the soles of our shoes against the hot sands and stones that once touched the feet of a God. Fishermen may still be casting their nets. Beneath hails of gunfire and the terror of modern warfare, men may still be teaching about a kingdom that does not fade. Souls passing from death into life.

Snaking through the knot of bodies, we’ll watch a foreign city come alive with night-lights and signs we don’t understand. Voices fly past us in strange languages and bands play on the street corner with makeshift instruments. Dancers step to the beat, and the bloom of bright dresses decorate the evening.

When we grow weary of the people scenes, we’ll find our way back into the solitude of nature. We can pitch tents under the northern lights and stay up waiting for the skies to sweep us into their performance of color and ecstasy. Then we’ll bravely whisper our secrets into the silence because we remember once again how small are even our greatest regrets and heartbreaks.

And at the end of it all, we’ll find ourselves sitting in a familiar, favorite café, speaking once again of the inconsequential—the office joke and the latte art. But I’ll have seen some of your soul, and you mine. For away from Home, we lose and find ourselves.

Come, and walk these rugged roads with me.